It all began with a conversation I had with Peter when I was fresh off the plane. We were hanging out in Hotel Caribe at a Peace Corps get-together, where boxed wine and the smell of feet circulated around the little crowded room. We were talking about music and I mentioned that I used to play drums. “Oh you’re a drummer!” Peter’s enthusiasm threw me off.

“Well, a lot of my buddies are musicians, and I would jam with them once in a while. I’ve never been in a band, but yeah, I like to play.” 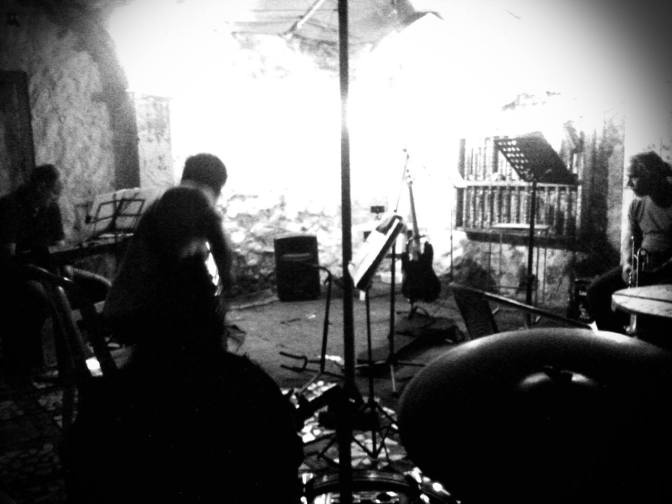 “We’ve got a band and we’re looking for a drummer. Our drummer got med-evac’ed*. Anyway, it’s a jazz band. Would you be interested? Just come this Saturday and check it out.”

The first Saturday night was the worst. I went to check out the music and the guys were a little too happy to see me. They waved me over, wanting me to play that day. What? I didn’t know what songs they were going to play, let alone how to play them. Early Peace Corps training hype told us to just say yes to new experiences. I told the guys I’d listen to a song and maybe join them for the next one. By the time they were done and the audience applauded I was so nervous. I became more nervous realizing I hadn’t really been listening to the song as much as I was gathering the courage to get back there behind the kit. Some other force lifted me from my chair, carried me to the back of the stage, and made me sit down at the drums. Guitar propped on his lap, Mario turned over his shoulder, said the name of some song of which I can’t recall. “It’s swing,” he told me. The casual way he said this and the lack of help it provided me reminded me that I had no idea what I was doing.

The band’s soft guitars and bass notes were united and then equally obstructed by some guy playing a basic rock beat a little too hard. Concepts like dynamics and comping were completely unheard of to me. Without knowing the song structures, without understanding the musical style, I played my very first show for a live audience. I don’t remember applause or the faces in the audience. It didn’t matter; I knew I had played horribly. After the show the guys wanted to go out. I made up some excuse and walked home.

In my free time I studied jazz drumming, rudiments, note subdivision, reading music, comping, and worked on my dynamics. Every week of practice I would learn a little more, get a little more comfortable, and have a little more fun. Over my two years of Saturday night concerts the band has featured several different members and dozens of songs in the styles of jazz (Bebop, etc), Bossa Nova, Rock, Pop, and Blues. Today, I’m very happy with how well we are playing. Our original core remains intact: Mario on guitar, Peter on bass, Jaime on trumpet and me behind the drums.

Playing in the band has been the longest-lasting and one of the most personally gratifying experiences of my time in Barranquilla. In the two years, I’ve discovered a lifelong passion and made lifelong friends. I hope never to forget the wild memories and joyous moments in which I forgot about self-doubt and just went for it.

* Medical evacuation (med-evac) is when a volunteer leaves country to get medical help. Sometimes, as in this case, the abbreviation is used interchangeably with medical separation, a term for when a volunteer is no longer able to serve due to an extended medical problem.